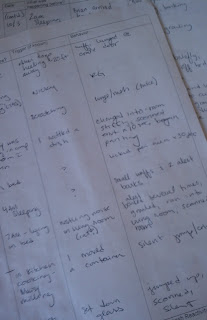 When you schedule an appointment with a veterinary behaviorist at the U of M, you’re asked to do a number of things. First, there’s a 12 page history form, which I found both frustrating (I don’t do well with rating things according a numerical scale), and perplexing (Is Maisy my best friend? Does she understand me better than anyone else in the world? What are they hoping to learn about us by asking these things?). You also have to get video of the problem behaviors, and while I thought this would be the hard, but ended up with nearly an hour of footage within two days. But the most difficult task, at least for me, is completing a behavior log.

The idea seemed simple in theory: every time Maisy showed a problematic behavior, I was to note the date, the circumstances, who was around, where we were, what she did, and what I thought caused the behavior. Since I love charts and checklists, I mocked up handy chart in Excel and printed it out.

Filling out the chart was difficult, though. I knew which behaviors I wanted to track, but underestimated how tricky it is to categorize some of the things Maisy does. For example, where’s the line between being startled by something reasonable and overreacting? How large must the reaction be, or how often must you see it, before you can write down that she was jumpy?

I also didn’t realize just how often she engaged in weird and potentially troublesome behaviors- I quickly ran out of room on the chart I’d printed up and had to revise it. Besides, should I list each individual jump, or is it better to capture the number of instances in a set amount of time? And of course, what exactly is “normal” quirky and what is “bad” quirky? Which things are worth writing down, and which are inconsequential?

I ended up with a lot of data, and even then, I know I didn’t capture everything. I don’t mean the fact that I couldn’t write down what I didn’t see, while I was at work or while I was asleep. I found that I’m so used to Maisy’s odd habits that I took them for granted. I saw things that I’d never really noticed before. And even then, things still slipped past me; it wasn’t until the last day of charting that I realized, hey, maybe carrying around a stuffed bunny head and whining every night for five minutes isn’t the most normal behavior.

Despite the difficulties, the behavior logs revealed some very interesting things about a dog who I thought I knew very well. After reviewing my logs, I’ve refined the way I describe her, I’ve learned things I didn’t know before, and I’ve begun to see patterns in her behavior. This is just an overview of what I learned:

Maisy is better described as “restless” than “jumpy.”
A lot of what I had previously described as fear was less about being startled by something and more about being unable to relax. For example, during a 45 minute nap one day, there were 11 times that Maisy lifted her head and looked around for up to two minutes following a soft noise. The longest I saw her remain resting during the week was 15 minutes. Maisy just can’t tune out environmental stimuli the way normal dogs can. Yes, she does have moments where she’s startled by something (legitimately or not), but more often, she’s just having trouble tuning out normal things.

Maisy wakes up frequently during the night.
I kept the log on my bedside stand, which is a good thing, because in the mornings, I’d look at it, read my barely legible notes, and think to myself, “I do not remember that happening.” But indeed, she woke me up growling or barking multiple times a night. Considering the fact that she’s so restless during low-key times of the day, this really isn’t that surprising. Still, I’m amazed that I didn’t remember it in the mornings. And hey- now I understand why I feel so tired all the time.

Maisy’s relationship with our cats is far more complicated than I realized.
I was even more surprised that she has so many cat issues. I knew that she does some resource guarding towards them, but I never thought much about it. Those cats are relentless in their quest for food, so I wasn’t surprised that Maisy needed to fend them off from time to time. But I didn’t realize that this behavior has carried over to “disciplining” the cats when they’re naughty. I have no idea if that’s what she’s actually doing, but that’s sure what it looks like. She will rush at the cats and nip them if they do something wrong, by which I mean, stuff that we’ve yelled at them for in the past like scratching furniture and jumping on the counter.

Maisy’s leash reactivity tends to happen when the other dog is already retreating.
I was surprised by how often Maisy’s reactivity happens after the fact- eight out of eleven documented instances happened after the person/dog was leaving, not as they were approaching. (I was surprised that she had so many instances of reactivity, too, but then I realized almost half were deliberate set ups in class so that we could capture video. Still- there were a number of small reactions that I probably wouldn’t have thought much about if it weren’t for the fact that I’m paying such close attention.)


Those first two things really confirmed that this appointment is the right thing to do. Maisy is clearly on edge much of the time. If the veterinary behaviorist recommends medication, I will have no objections to giving it. Given her restlessness, and given the fact that I documented 43 instances of barking or growling over very minor or undetectable stimuli, it almost seems inhumane not to give her some chemical support.

The behavior logs also helped me see some training opportunities. For example, there is a lot I can do to promote a more harmonious relationship between Maisy and our cats now that I know it’s a problem. The logs have also given me a nice baseline. I wish I had them from a year ago, back when we were first starting the hardcore behavior mod work. I’m glad I’ll have some basis for comparison in the future.

All in all, keeping a behavior log, though challenging, was incredibly eye-opening, and I highly, highly recommend that any of you with “quirky” dogs keep a log for a week or so, too.
Posted by Crystal (Thompson) Barrera at 6:27 PM

Glad to know I'm not the only one frustrated by this sort of thing. Categorizing types of barks and numbers of barks and volume of barks still is next to impossible.

You should get a prize for being so diligent!!

Ooh, I remember that questionaire! I thought some of the questions were odd, too.

Dr. Duxbury is going to love you! She may not know what to do with you because your skill level is so above her typical clients, but I'm sure she's going to enjoy working with you.

Crystal, this is absolutely fascinating, I can't wait to hear more.

Sorry to hear your logs weren't read! I assume there will be a follow up post explaining...

I think a behavior log would be very beneficial to me with one of my dogs in particular. Last week we were at the vets and she brought up putting him on Prozac. I am torn, but I think a log will help me really get a better handle on how frequent and intense his anxiety behaviors are, and help me along with the vet and my trainer to make a better decision.

Looking forward to reading about your visit.

The short version is that my pre-appointment questionnaire had enough detail that she didn't have a ton of questions. She felt she understood the problem from that, and then the videos (I brought an hour's worth) really helped her see what I had trouble describing.

Hey Crystal! Would you mind sharing the version of the behavior log you came up with? I am working on a system for logging Griff's behaviors and would love to see what you came up with. If you're up for it, you can email me at dog.nerd.101@gmail.com. Thank you! Kirby

Kirby, I just emailed them to you. Let me know if you didn't get them.

Hi Crystal, I would also be interested in getting copy of the template for the behavior log that you created. I think it would be a good thing for me to track with Joey. can you email me at severnswb@hotmail.com ? Thanks! Stacy