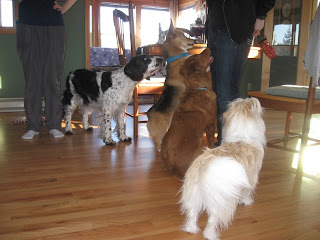 Using desensitization and counter-conditioning, Maisy has learned to be
comfortable in the presence of other dogs- even ones she doesn't know!
In my last post on learning theory, I discussed classical conditioning, which is the process of creating automatic physical or emotional reactions to a stimulus. Sometimes those associations are useful and desirable, and sometimes they’re not, like when a dog associates the presence of children (or other dogs or bicycles or balloons or whatever) with something scary. When this happens a dog might shut down in fear or behave “reactively” or aggressively. Although it is unfortunate when this happens, the good news is that we can change these responses through two complementary processes called desensitization and counter-conditioning.

History
In the post on classical conditioning, I discussed the Little Albert experiment, in which a psychologist was able to condition a child to be afraid of fuzzy white objects. His student, Mary Cover Jones, began experimenting with the reverse, and was able to use classical conditioning to reduce fears. Joseph Wolpe expanded upon her work following World War II. Reasoning that if most behavior is learned, it can also be unlearned, he developed a systematic approach for reducing undesirable conditioned responses called desensitization.

Definition
Desensitization and counter-conditioning are like two sides of the same coin: they are distinct from one another, but work best when paired with the other. They are used when we want to change the physical or emotional association a dog has already made with something.

Practical Application
Okay, so let’s say your dog has created an association that you want to change. Perhaps he’s fearful like my dog and barks or growls or lunges at Scary Things. One thing Maisy will do this toward is people riding bikes. Although there is nothing inherently scary about bikes, the behavior happens because she has formed an association that says “bikes are scary!”and reacts automatically.

In order to stop the behavior, we need to teach the dog that bikes are not scary. We’ll do this through desensitization. However, if we don’t give the dog any information on how he ought to feel about the scary stuff instead, it’s likely he’ll “re-sensitize” to it. This means that we need to take our training a step further, and teach the dog that bikes are predictors of awesomeness. This will happen through counter-conditioning.

Start by making a plan. Identify as many of the things that triggers the undesirable association as possible. Pay attention to the variables for each trigger, too: is it all bikes? Only ones ridden by children? Or maybe men? Does the speed of the bike make a difference? Or maybe the distance?

Although we typically think of thresholds in terms of distance, duration and intensity matters, too. If you can’t change your proximity to the trigger, try lowering the intensity. Use visual barriers and sound-dampening devices. Have cyclists move slower, seek out older children rather than younger ones, or whatever makes sense given your dog’s responses.

Now you’re ready to train. Take your dog somewhere that you can expose him to one trigger only and find the “sweet spot.” Now, create a new association by pairing the trigger with something awesome. The easiest way to do this is with really yummy food. Think chicken or hot dogs or whatever your dog likes best. As long as the trigger is present, feed your dog continuously. Stop feeding when the trigger goes away.

This will take time- Pat Miller recommends working with the same trigger and intensity for at least 20 minutes, or until your dog sees the trigger and says, “Yay! Where’s my chicken?”- whichever is longer. Then you can increase the intensity (whether that’s by moving closer, having the cyclist go faster, or getting more children to hang around) and repeat the process. Increase the intensity in very small amounts. If do too much too soon, you will undo you hard work and possibly even make things worse. Be very careful to stay in the "sweet spot" during all stages.

This process is time- and labor-intensive, but the more work you put in, the stronger the new association will become. I promise, it’s worth the effort. If you aren’t getting the “yay!” effect, I highly recommend consulting with a skilled trainer. A good trainer can help you figure out what’s going on with you and your dog.

Sources
In addition to the links in this post, you may find the following websites interesting:
Patricia McConnell on counter-conditioning: is it classical or operant?
This site does a great job of explaining how to create a systematic desensitization and counter-conditioning program.
Although designed for human use, this site does a nice job of breaking down the “anxiety hierarchy” when creating a desensitization plan. It may also have applications for those of us with ring nerves!
Posted by Crystal (Thompson) Barrera at 1:32 PM

I think once everyone sees this pictures of Maisy this weekend you're going to have start defending her reactive dog status!

She was very good, wasn't she? Thankfully, I won't have to work too hard to defend her reactive dog status: all that barking-at-the-reflections-in-the-windows nonsense speaks for itself. ;)

Hi Crystal,
Sam from Marge's blog told me about your blog. My dog's name is Kirby and he is dog reactive. We just started rally last week, she told me your dog is reactive and also in rally. I am looking forward to reading your blog! Your dog is adorable!

Maisy is indeed reactive (although we're getting to the point that I'm wondering if I should change that to "formerly reactive"), and we do rally! We've been taking some time off to deal with Maisy's anxiety, but I hope to be back in the ring by the end of the year. :)

Kirby is also super-cute. It would appear we have a type, yes?

I love these posts of yours!

I really saw the magic with CC/DS with both of my dogs. Emma was terrified of people behaving aggressively and would bark at them, trying to explain herself. After a few months she's much more comfortable and relies on me to take care of her, which is awesome!

And then after Charlie got attacked in January he started being incredibly reactive to dogs on sight. Luckily I caught it really early and in a few weeks he made huge progress. The power of R+ is incredible!

Thanks again for these posts!

Great, easy-to-understand post! And love the photo of Maisy so relaxed around the other dogs!!

I love how it's Elizabeth gathering all the dogs. Who else would it be? :)

I do have a question regarding this:
This will take time- Pat Miller recommends working with the same trigger and intensity for at least 20 minutes, or until your dog sees the trigger and says, “Yay! Where’s my chicken?”- whichever is longer.

--I'm remembering information from the TAGteach seminar about length of a training session. I know I was mentally fatigued just a couple minutes (if that!) into being clicked. I know this is different, as it's not shaping the behavior specifically, and I don't think you're clicking, but 20 minutes struck me as a really long time to work with something.

Or it could be that it's morning and I haven't processed enough information yet today for it to make sense.

ETTEL: You bring up a great point. The sooner you can implement DS/CC, the easier it is to change the association. I'm glad your Charlie is doing so much better. That was such a scary attack.

NAT: Thank you, and I agree- I love how relaxed she was around all those dogs.

MEGAN: Yes, it would be Elizabeth with all the dogs. Note, however, that her own dog is oddly missing from the photo...

As for the 20 minutes thing, I agree that it is a VERY long time. However, I think it's different from shaping in that we aren't asking the dog to do anything. Shaping is exhausting because the dog has to think, to offer, to do so much, and because the target is constantly moving as we increase the criteria.

If you're doing DS/CC sub-threshold, the dog really should be doing nothing more than noticing that hey, there's that scary thing, and oh here's a piece of chicken. You shouldn't be so close that the dog is upset or worried. If the dog becomes upset/worried, you're probably too close, or the stimuli is too intense and you should back off a bit. If you can't, then yes, I would agree with shortening the time frame. However, if the dog isn't actively worrying, 20 minutes really shouldn't be all that exhausting.

Does that make sense? I haven't had coffee yet today...

Megan, I'm not Crystal, but I've been doing DS/CC with two of my dogs for the past few months, so I can just tell you my personal experience. As long as the dog is under threshold, I don't think 20 minutes is too long for this type of exercise. I definitely keep my clicker sessions WAY shorter, but I think with DS/CC the dog should not necessarily be exposed to the trigger the entire time--I sit with my dog Jun at the back of a parking lot to practice looking at people and we could do 20 minutes easily if it weren't so cold out right now. There is a person to look at every 30 seconds or so, so we are mostly sitting around. If we kept it to, like, 5 minutes we would barely get any work in! We will also take short breaks of going behind the car to chill out, but it's pretty boring work. Now with a dog teetering on the edge of threshold (my other dog) 20 minutes could feel like an eternity, probably for both of us!

Hi Crystal,
Thanks for your comments back to me. I checked out the video and found it very helpful!

Hi, thanks so much for such a clear article. I had been confused between the difference between the two, now I understand that I was already doing both :)

I am going through a hard time with my dog Saber, he is scared of bikes, to the point he will actually shake. I am training behaviour adjustment at the moment and hope to pull him through this.

Every bit of information helps.