What is Generalized Anxiety Disorder? (And Does Maisy Have It?) 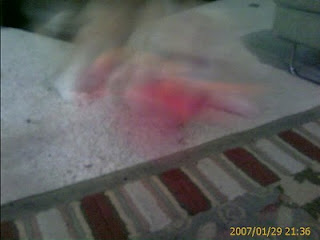 This is what puppy-hood was like. Endlessly.
Maisy has never been a “normal” dog. Most of my pictures of her as a puppy have motion blur, and not just because I have a cheap point-and-shoot. She just never slept. At three months, she became overly upset at the appearance of a soda can in the bathroom. And when she took her CGC test at eight months, the evaluator wrote on the form, “seems a little nervous.”

“Little” was an understatement. Although Maisy is generally a very outgoing and curious dog, she is also very cautious and worried about new experiences. I know this sounds contradictory, but to a certain degree, I think this is normal for many reactive dogs- they feel conflicted about what’s going on around them, and react accordingly. But Maisy sometimes seems even more conflicted about things. For a long time, I simply thought she was “quirky,” but when a friend shared a handout on Generalized Anxiety Disorder with me, I began to think differently.

So, what is Generalized Anxiety Disorder (GAD)? It is when a dog consistently overreacts to things, is more active than would be seen in a normal dog, and is excessively vigilant to its surroundings. The key here is the extreme nature of the dog’s reactions; these reactions will be seen even when there isn’t a “truly provocative stimulus.” Further, there is rarely a pattern to the things that cause this overreaction. For example, if a dog overreacts only to thunderstorms, it may still be anxious, but it would not be diagnosed with GAD.

Dogs with GAD are typically wary of things or startle at things in a way that seems out of proportion with the actual stimulus. Even when a reaction seems to be justified, the reaction is still more intense than what would be expected. They are often very light sleepers who awaken easily. They may be destructive, but there’s no true pattern to their destructiveness. They might have some general reactivity to unfamiliar people or places. Physically, they may demonstrate regular vomiting, diarrhea, itchiness or rashes.

Does Maisy have GAD? Well… it sure sounds like her. Incredibly active? Check. Overreacts to things? Check. Vigilant about her environment? Check. She is definitely a light sleeper, and she certainly startles often. She had some of the physical symptoms as a puppy. But other things don’t fit the diagnosis. For example, she’s never been destructive. While Maisy has always demonstrated a lot of caution with new objects, she’s actually pretty friendly and interested in meeting most new dogs and people.

I don’t know if she actually meets the diagnostic criteria for GAD. GAD is considered a diagnosis of “last resort”- most anxiety can be categorized in some other way, such as separation anxiety or thunderstorm phobia. Still, she is anxious in general, so in order to resolve this mystery, Maisy has an appointment next week with Dr. Duxbury, one of only 51 board-certified veterinary behaviorists in the US and Canada.

I am both excited and nervous about this appointment. Dogs with GAD do not easily learn to ignore the things that upset them, and as a result, medication is often needed. I don’t know if Maisy needs medication, but I’ll be honest: I think I am approaching the limits of my abilities. Maisy has improved incredibly in the year-and-a-half that I’ve been doing behavior modification with her, but she still seems so uncomfortable in her own skin sometimes. So, even though I’m not crazy about the idea of medications- I trend more holistic most of the time, after all- I can’t help but wonder if it isn’t the kindest thing I can do for her.

(Note: the handout, and this post, is based on Dr. Karen Overall’s Clinical Behavioral Medicine for Small Animals, 2nd Ed..)
Posted by Crystal (Thompson) Barrera at 5:25 PM

I may have posted this earlier, so pardon me if I'm repeating myself, but our little guy sounds SOOOO much like Maisy! Not destructive in any way, but he runs or cowers at things like a) my laptop cord, b) a pillow falling off the couch, c) the rustling of a plastic shopping bag, etc. etc. On walks, he is currently a bit freaked out by the Halloween ornaments on our neighbors' lawns. He seems to run either on ON (hyper and anxious) or OFF (lying down, with an expectant expression). There is no in-between, relaxed state with him, except very rarely. I recently read something about PTSD in war veterans, and I thought, "hey, sounds exactly what my dog is experiencing!" I know he was a stray for a little while, and he is also probably a part-herding breed, so I attribute his anxiety to bad experiences/hyper-viligant genes. In any case, good luck to you and Maisy. You are doing everything you can for her...kudos!

Yes, that does sound like Maisy! The weird thing is that a pillow falling off the couch might freak her out today, but not tomorrow. It's never consistent.

I think that you're going in the right direction with this appointment. I look forward to hearing what comes out of it.

Oh wow, I don't really know Maisy so had no idea she was so jumpy besides just being reactive (ha! "just" :) ).

I'm really glad you're seeing a behaviorist. I'm sure you will learn a lot and be able to help Maisy out some more. I'm sure whatever you decide about the medications will be the right thing for her.

I can't find my papers right now, but Luna was diagnosed with this sorta thing ("Global anxiety" maybe?). I really regret not taking her in sooner, esp as I've been visiting/in contact with a veterinary behaviorist for 3.5+ years for Blaze.

I don't know if we'll continue long term with what she's on now, but it IS making a difference and it's good to see Luna more happy.

I think you'll have a great time and come home with a lot to think about!

Dude, I was /just/ talking about this today.

Gatsby came to school with me this evening to sit in a science lab and hang out with friends, most of whom he has met before and all of whom like dogs.

Now, he doesn't see a lot of men and men tend to tweak dogs out a little bit more, but "conflicted" is the perfect word to describe his reaction to a certain friend. He clearly very desperately wanted to make friends, and once he was within a few inches was a total sweetheart, but crossing the few feet from me to this guy was /awful/ for him. There was advancing and retreating, stretching the front legs forward while keeping the back ones planted (this is an interesting thing to see, the dog is sort of leaning forward and backward at the same time), and some insecure vocalizations. It wasn't an outright fit, of which I am grateful, but he was really, really conflicted.

I am eager to hear how the appointment goes. I'm so glad I found your blog, you and Maisey have been a real source of hope for me. I tend to only post myself when I'm either really high or really low, and this blog is one of the things that really keep me going.

Good luck with the appointment. I hope it is helpful.

Thanks everyone. This has been a hard decision, and I wasn't sure how people would react. I've felt weird about it myself, actually, like I'm "giving up" or not a good enough trainer.

I'll post more on Sunday, but I've been keeping behavior logs for the appointment, and after seeing them, I know this isn't giving up. I may have made mistakes in training, but not the kind that can account for the pervasive stress she must be experiencing.

What a learning curve you are on with Maisy
every time I read about your "adventures" I think how lucky she is to have you ... and how lucky so many other dogs are to have you having these experiences

A medical opinion is NOT giving up - nor -if you decide to go the medicinal routine is it ANY reflection on you as a trainer - it's an acknowledgement of Maisy and her baggage. That's all.

No beating yourself up no matter what you decide to try. You are doing it to make life better for you and Maisy so no one should judge - even if they THINK they have walked in your shoes.

Thanks, Andrea. I really do appreciate everyone's support. I think if I'm ever in a similar situation in the future, I'll seek out a vet beh earlier. But, I'm doing the best I can with Maisy. She's my first dog, so there's a huge learning curve. :) I'm lucky to have her- she's so patient with my mistakes.

Thanks for shearing about this I thinks its very hopeful post and very important post for us.thanks for your great and helpful presentation I like your good service.I always appreciate your post.Excellent information on your blog, thank you for taking the time to share with us.
bipolar unspecified icd 10

We are legit suppliers of pain killers like Xanax,Oxys,Adderall,Norco,Perks,methadone and many other. Our top priority is to see our clients and brothers progress in health. We do secure delivery, If there is anyone interested in ordering, Just hit the details below for price quotes:

We are also in charge in the supply of research Chemicals such as mdma,Crystal Meth Ice,Ketamine,cocaine,Lsd and many other. Feel free to get your order mailed without any difficulties via EMS,FedEx or USPS.