Maisy is, to put it bluntly, a bitch. An only child most of her life, she's never really had to share. This has never been a problem in the past. Although she would try to resource guard things from the cats (who would just look at her like um, there is no way I want your stupid Kong, geesh and walk away), she's never really experienced someone fighting back.

Pyg, on the other hand, is socially confident. He doesn't start stuff and he won't brazenly steal things from Maisy. He will opportunistically steal her stuff if she gets distracted, and I've even seen him do the whole oh, I think someone's at the door bark-bark-bark... HA! SUCKER! fake out thing. But when Maisy is a bitch, it's ON.

I know I'm not alone in this; all multi-dog households are going to have the occasional disagreement. So why don't we talk about it more? Well, I've always been honest on this blog, so yes. My dogs fight sometimes.

Most of the time it's completely appropriate and involves a hard stare, a lip lift, or a brief growl, with the other dog licking his lips, looking away, or shaking off. All in all, no big deal.

I had one of those sometimes recently. I was eating a snack, and both dogs were quietly begging at my feet. In other words, just another day at la casa de los perros. Except I wasn't sharing, and this upset Maisy. I have no idea what was going on in her furry little head, but my anthropomorphic belief is that she was upset about the lack of sharing and this made her anxious/stressed/frantic/bitchy. And so she divebombed at Pyg, growling and snarling.

I did that stupid thing you're not supposed to do: I reached in to break up the fight. I gotten bitten. It was no one's fault but my own, and I think Pyg was as surprised to make contact with my arm as I was to get bitten. About the only good thing is that now I know what Pyg's bite inhibition is like (worse than I thought).

It was also the wake up call I needed to start working on the issue. I'm fortunate to have an awesome friend who currently lives with seven dogs and has a surprisingly small number of fights in her house. I emailed her, and she wrote some blog posts just for me! (Okay, fine, she was already working on them, but she finished them for me.)

Her advice ended up pretty long, so it's been split into three posts. The first one is on management, and you can read it here. For the most part, I've done a prety good job at this. The dogs already eat in their crates, but I've tightened that up to include times when I'm eating something and not sharing or when Maisy is otherwise looking stressed.

The second post is on actual training things you can do to help your dogs get along better. You can read it here. I'm only just starting on this. Pyg has pretty good impulse control, but Maisy's has really slipped over the years, so I've got a lot of work to do.

Part three will, I'm told, include case studies... I'd say that I will update this post when she updates, but, um. Probably not. Oh well. You're all smart. you can find it, I'm sure.

Anyway, I'll be sure to keep you guys updated on how things go...
Posted by Crystal (Thompson) Barrera at 12:47 PM 1 comment: Links to this post

This month, the dogs and I are reviewing Wysong's Freeze-Dried Treats. These are new on chewy.com, and they're a great addition. 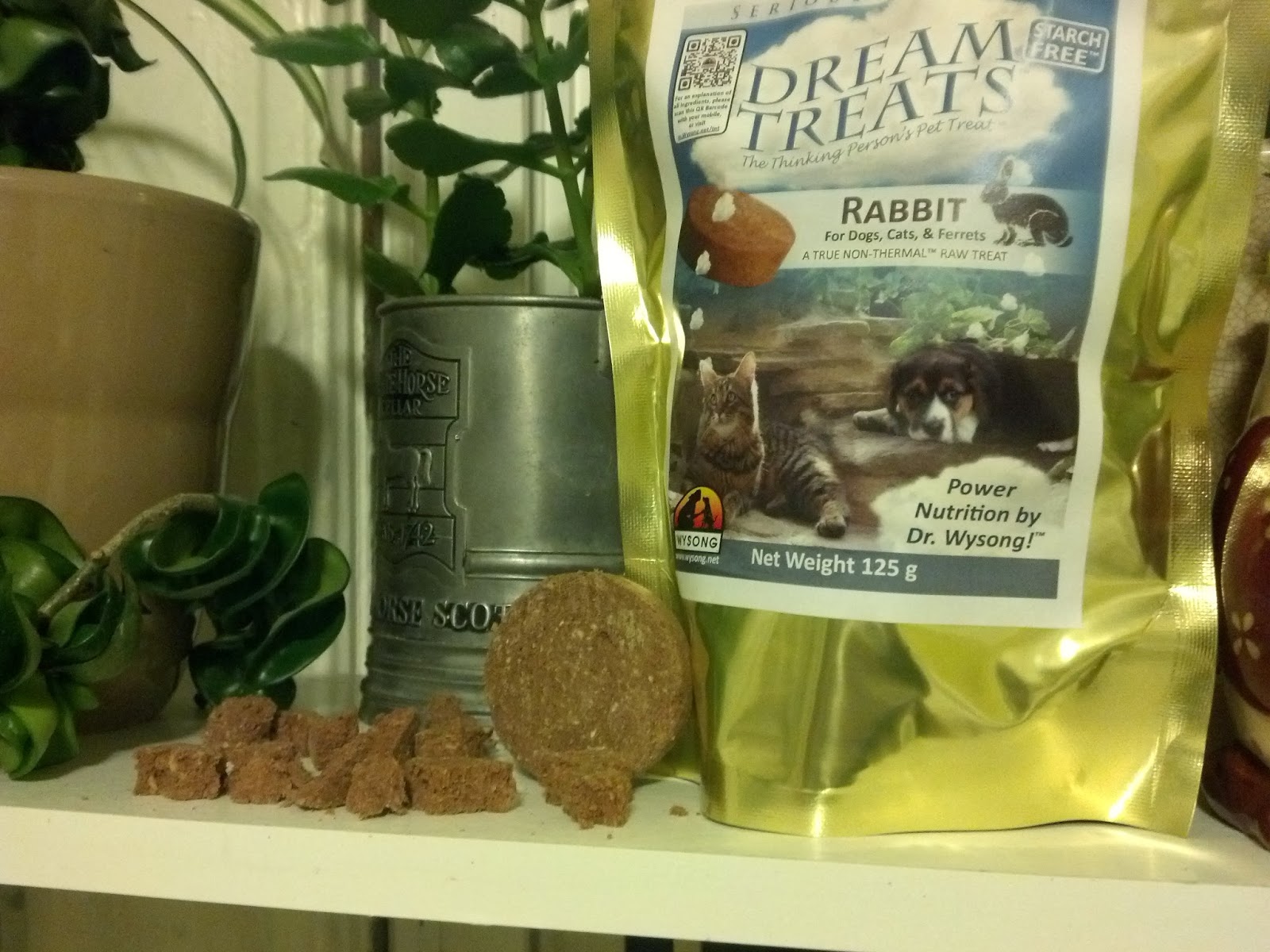 There's a lot to like about these. They come in large, round discs, but break apart easily and with very few crumbs. Although they don't go quite small enough for an intense clicker session with a wee dog, they do break up well enough to reward around-the-house manners. Plus, the dogs like them enough that they make a great high value reward for recalls and the like. The ingredients are good, and the treats are made in the USA. About the only thing I don't like about them is the fact that they have a lot of ingredients. Quality ingredients, but quite a few, which is a concern for the allergy dogs among us. But, it's a teeny, tiny quibble.

For all those great qualities, though, I haven't yet told you about the best thing. These treats are magical.* For reals, these things are so good, I was able to make this bit of wizardry happen:


Yup. All four of my dogs sat at the same time.** And only one of them has actually been trained! The other three have gotten some of the basics, but I wouldn't call them trained by any stretch of the imagination. Magical treats.

Anyway, now is the time for the disclaimer: I got these free, I think they're awesome, and no one told me to say that.

** What's that? You're wondering since when I've got four dogs? Good question! Maybe I'll answer this soon. Or maybe no one reads these reviews, and I won't have to explain my statement. I guess we'll see...
Posted by Crystal (Thompson) Barrera at 12:41 PM 1 comment: Links to this post

Email ThisBlogThis!Share to TwitterShare to FacebookShare to Pinterest
Labels: reviews

Sometimes Bad Timing is the Best Timing of All 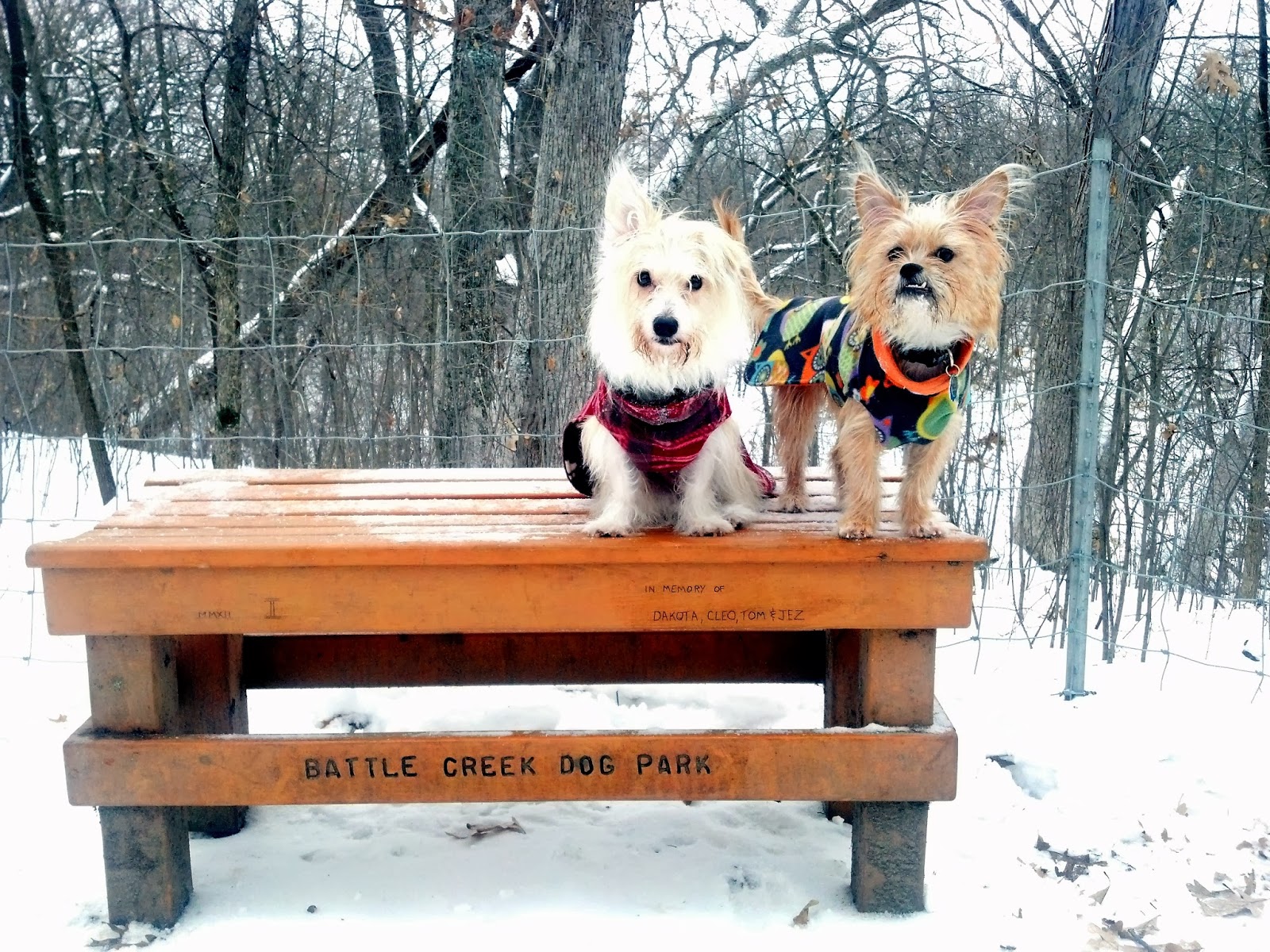 Logically, adopting Pyg was one of the dumbest ideas I've ever had. Struggling under the weight of Maisy's medical bills, her slow recovery, and the fear of what the future would mean for her, I knew that adding more to my plate- and hers- was probably ill-advised. But my heart and soul told me that no matter how bad the timing, I needed to have Pyg in my life, and since my intuition is rarely wrong, I took the ultimate leap of faith.

I won't lie: things have been harder with Pyg around. Money is uncomfortably tight. My carpets are smellier. And I've had quite a few things destroyed. At last count, I've lost three containers of fish food, a DVD case, my wallet, a skein of yarn, a spool of thread... the list goes on and on, and with few exceptions, I have no freaking clue how he's gotten a hold of these things.

But things have also been so much better with him, too. People who know me will know that I have a bad worrying habit, and that for many years, Maisy has been the focus of much of it. Pyg has proven to be a wonderful (if naughty) distraction. I still worry about Maisy of course, but it's much harder to do with him around to pick up after.

What's more, during a time that I could be moping around about Maisy's shortened future, I have Pyg to make me laugh. Pyg is such a funny dog, and the infusion of joy he's brought in to my household has been good for both me and Maisy.


Perhaps the most important thing he has brought to my life, though, is the knowledge that love is too big to be contained in just one being. I never thought I could love another dog as much as I love Maisy. I was wrong. Pyg has taught me that opening yourself up to the possibility that you might have more than one heart dog or soul mate doesn't diminish the amount of love you have for the first one. It only allows your heart to be fuller.
Posted by Crystal (Thompson) Barrera at 9:00 AM 2 comments: Links to this post

Email ThisBlogThis!Share to TwitterShare to FacebookShare to Pinterest
Labels: i love this dog, maisy, Pyg

In September 2013, Maisy became suddenly and critically ill. Our blog readers rallied around us, providing us with the emotional and financial support needed to get through a very stressful time. Although I will never be able to pay you all back, I can pay it forward through Project Gratitude. Please email me at reactivechampion (at) gmail (dot) com if you have an individual or cause that you would like me to consider donating to.

This month, I am donating to Boris, a one-year-old French Bulldog with a congenital heart defect. Without life-saving surgery, Natasha will lose her adorable puppy. I'm afraid I can't send her much, but I can boost her signal. Will you guys help, either via money or by sharing his story?