I had a hard time deciding which day we should celebrate Pyg's Gotcha Day: today, the one year anniversary of the day he first came to live with me as a "foster" dog, or next week, the anniversary of the day I formally adopted him. I chose today because, let's be real, he was never actually a foster dog. I planned to keep him before I even met him.

I seem to have a habit of adopting dogs on impulse, and so far, that's worked out for me. I ADORE this dog. I really haven't accomplished much with him in the way of training and dog shows, but it doesn't seem to matter. He fits well in my household (which has expanded greatly since I adopted him), and he is definitely the most behaviorally sound dog of the four of them.

When I think back to what he was like a year ago to what he's like now, well... he hasn't really changed at all, and he's completely different. If that makes any sense. When he first came home, he'd been in foster homes for quite awhile. He had made a weekend-long plane/car/plane journey to get here. He did NOT like crates after that! He was nervous and a bit reactive. He was playful, yet had an off-switch.

He still isn't crazy about crates, but he's got a great understanding of staying in there until released. He's incredibly confident; very little phases him, even when the other three dogs are barking hysterically. He climbs on things and under things. He's friendly. He LOVES TO BE TOUCHED. Oh my. If you stop petting him, he will paw at your hand until you start again. It's obnoxious, but also pretty awesome. He continues to be playful, and he continues to have that really nice off-switch.

He loves to go hiking. I took him on the spring backpacking trip, and he pretty much thought that was the best thing ever. He was enthusiastic and happy to be hiking, and would curl up nicely in the tent with me at night. It was just wonderful.

Thanks for the great year, buddy. I'm so glad you showed up in my Facebook feed last year. I'm so glad I took a chance on you.
Posted by Crystal (Thompson) Barrera at 1:10 PM 1 comment: Links to this post 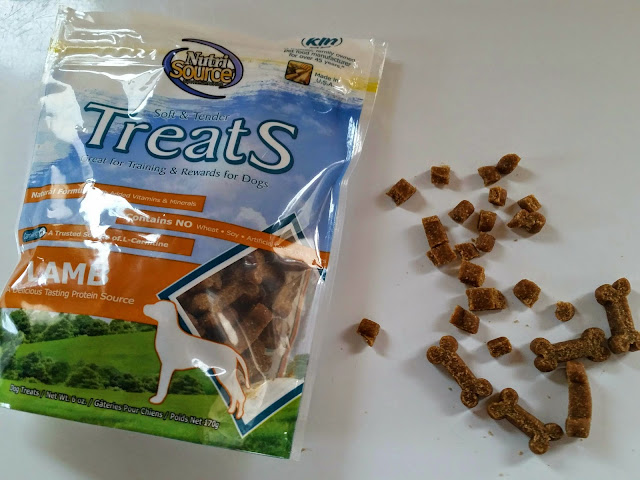 This month, the dogs and I tested out Nutrisource Soft and Tender Lamb Treats, courtesy of chewy.com. Everybody liked them! The dogs all scarfed them down, and even the kitty tried a piece. You know it's good when when picky-cat eats it and asks for more! I loved how easy it was to break these into small pieces (smaller than a Zukes, so awesome for training!) using just my hands. Bonus: minimal crumbs!

Posted by Crystal (Thompson) Barrera at 4:57 PM No comments: Links to this post

Email ThisBlogThis!Share to TwitterShare to FacebookShare to Pinterest
Labels: reviews

If your reactive dogs are anything like mine, they like to bark out the windows. Napoleon is especially bad about this, becoming downright hysterical when he sees our upstairs neighbors out in the backyard. It's loud, it's shrill, it's annoying... and it's certainly doing him no favors to get so worked up, either. 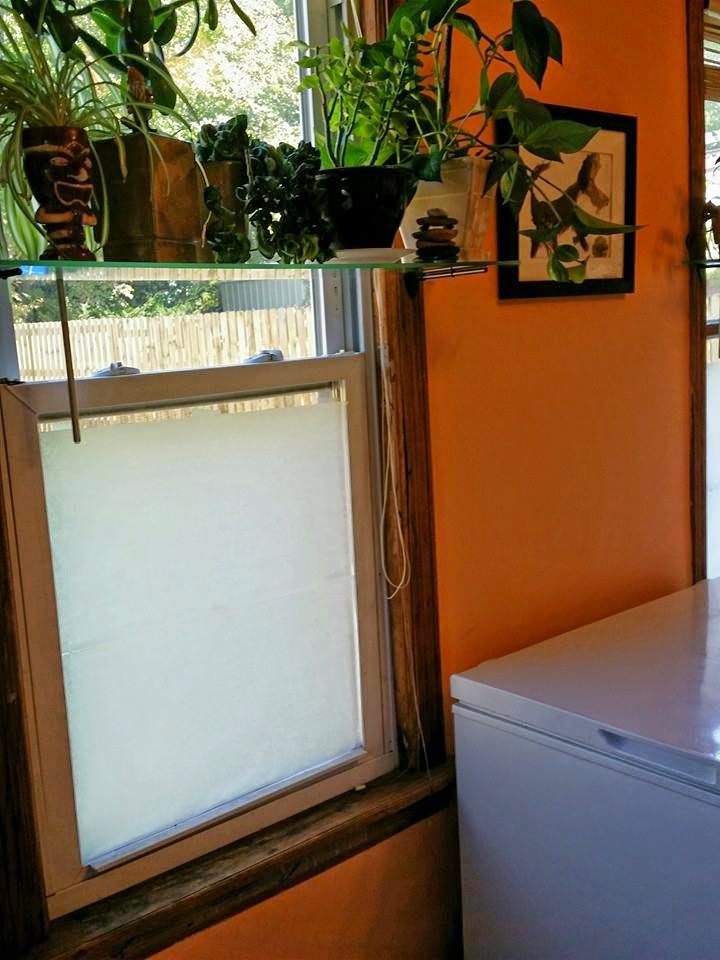 Enter window film. You can easily buy a translucent window film at about any hardware store. But, depending on the product, it's fairly expensive, and the directions seem pretty tedious. You can order it cheaper online, but then you have to pay shipping and/or wait for it to come.

I was too annoyed to wait and too lazy to run to the store, so I decided to play MacGyver instead: I taped wax paper to my windows. It's not as pretty as the stuff you buy in stores, but it's way, way cheaper, totally easy to put up, and if it doesn't work, you're out nothing.

This method blocks visual stimuli while still allowing light in. It took Napi's insane barking from a 10 down to a 3 or 4 (he can still hear what's going on outside). It also reduces the length of time he barks from omgforever to a minute or so. It's a win.

PS- I know I totally shared this over on facebook earlier, but I decided to share it on the blog proper in case you don't follow us there.

PPS- I totally only used the word MacGyver because I think Richard Dean Anderson is cute. But he's way, way cuter in Stargate: SG1 than in MacGyver.

Posted by Crystal (Thompson) Barrera at 7:45 PM 2 comments: Links to this post

Today is Maisy's 8th birthday. I can't believe she is firmly middle aged now. It seems like just yesterday she was a puppy.

This last year has been hard; she was so terribly sick last fall. Everyone but me knew that she almost died. I still can't really make that work in my mind. I just can't let myself think about her dying. I am glad that I have been spared that heartbreak.

Maisy was on steroids from last fall until the end of June. She was weaned off them slowly, and she's done wonderfully without them. I haven't seen any sign of relapse, for which I am grateful. Because her illness was immune-mediated, she's always at risk of it happening again, but so far, so good.

Maisy saw the ophthalmologist last week and was discharged. Although she still has some corneal dystrophy, it has improved greatly. Maisy will continue to receive the eye drops twice a day for the rest of her life, but unless her eyes get worse, she won't need to see the eye doctor again.

So all in all, Maisy is doing wonderfully, and as we enter this new year, I'm grateful for everything.

Posted by Crystal (Thompson) Barrera at 2:31 PM 2 comments: Links to this post

In September 2013, Maisy became suddenly and critically ill. Our blog readers rallied around us, providing us with the emotional and financial support needed to get through a very stressful time. Although I will never be able to pay you all back, I can pay it forward through Project Gratitude.
Please email me at reactivechampion (at) gmail (dot) com if you have an individual or cause that you would like me to consider donating to.

In light of Sophia Yin's death this week, I decided to donate to a mental health cause. I chose the Walk In Counseling Clinic, a local nonprofit that provides free, confidential counseling to anyone who walks in the door. I have used the Walk-In Clinic a few times myself, so I know that it is incredibly accessible, completely helpful, and potentially life-saving.

Posted by Crystal (Thompson) Barrera at 8:31 PM No comments: Links to this post