The Luxury of a Lie

As a rule, I consider myself to be a pretty honest person. Although it would have been easy to present Maisy as a better dog than she was (and myself as a better trainer than I am), I've always opted to lay it all on the line on this blog. I've tried to avoid making excuses for her behavior. I've uploaded videos largely unedited. I've talked about some of the dumb mistakes I've made. In short, what I've written on the blog is pretty much things as they are.
But recently, I discovered the luxury of a lie.
No, not online. In real life. You see, Maisy and I were out for a walk around the neighborhood. When we are out, the vast majority of the time I will say no if anyone asks to pet her. If someone tries without asking, I use body blocks to prevent them from getting close. But one of the things that has always confounded me is how to respond to the question, “Does your dog bite?” 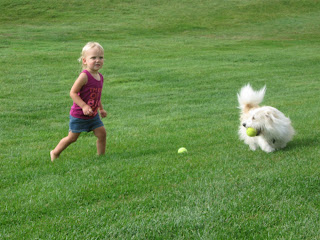 Not biting, but definitely not comfortable, either.
I quickly learned that this is apparently how children in my neighborhood ask for permission to pet a dog, so even though the answer is technically no- at least if you are looking at the past to predict the future- I've found that actually answering in the negative isn't good enough. Kids are fast, and she's come close to biting when I haven't been able to add “but you can't touch her anyway” quick enough. Which is why when the question came up last week... I lied.
The child in question stopped dead in his tracks, and then started backing away. When we were later approached by an 18 month old, I fibbed again, telling the toddler's mom that her child couldn't pet my dog because she bites. The mom thanked me for keeping her baby safe, and continued on their way.
Sure, this departure from stark honesty was a bit weird, but it was also kind of awesome. It was so easy, and I didn't find myself making excuses and giving lengthy explanations for why they couldn't pet my dog. My lie was readily accepted, and incredibly understandable. Some dogs bite, and you shouldn't approach the ones that do. By giving Maisy this really horrible label, I relieved us both of a lot of discomfort.
So while I can't say that I find lying comfortable, exactly, I do find it somehow luxurious.
Posted by Crystal (Thompson) Barrera at 2:58 PM

I found myself using this lie a few times as well. It's hard to say it, I half expect that someone who knows Ruby will come up from behind me and expose me :)

I'm guilty of this too. There's a lot more to it than "my dog bites."
He has never broken skin (though I would call it more than a "nip" because it hurts), and most people can pet him without a problem.
When adult/child combos ask "Can I pet your dog?" I generally respond with "He's afraid of children."
Parent's know what this means - he might bite.
When I'm confronted with only children the answer is always "MY DOG BITES," since as you said, kids are quick and don't always process the potential danger unless it's obvious.
A lie is nothing compared to keeping kids safe, and keeping your dog from being put in an uncomfortable situation. There is such a stigma against a dog who uses his teeth, even if just in a warning nip, that we want to explain to people that they are not "bad" dogs. But at the end of the day, I don't want my dog to have a bad experience, and with children especially, I don't want anyone to get hurt (even if it's just a nip).

One reply I've used before is, "All dogs can bite."

And then you can go on and say, "Do not pet her--it makes her unhappy."

My dog gets along well with people, but he's dog-reactive and when he's stressed his bite pressure when taking treats goes up. So when another dog's owner would say "My dog's friendly," I used to respond with "My dog isn't" -- which wasn't true, but it was a lot easier than explaining reactivity.

I no longer do this. I live in a small-town/semi-rural area. Dogs that get loose and kill livestock are routinely called "vicious." Ignorance about dog behavior is high, especially among newcomers to the area.

Some of them are more reactive than my dog: they snap at anything they consider a threat. A few of them are very capable of going to town officials and saying "So-and-so says her dog bites" or "She says her dog isn't friendly." One or two such complaints aren't going to go anywhere -- but Travvy is an 85-pound Alaskan malamute. Kids are always asking if he's a wolf. He doesn't need those whisper-whisper strikes against him. Neither do dogs like bull terriers that are already subjected to bad PR and breed prejudice.

So I'd be careful with those lies, and even with the unvarnished truth. Keep the people safe, but be aware that these lies and exaggerations may have unintended effects.

I posted about a similar thig today. I dont tell people that my dog bites, I tell them that I bite and I mean it. Cross my dog and you will see me get rather vicious.

I have 2 fearful dogs a miniature poodle and a pit bull in my pack and I always say that those two bite when asked to approach/pet them. No they haven't bitten anyone but I also don't want to set them up for failure and have a disaster happen. I'm with you, sometimes its just easier to say they bite to protect yourself, your dog, and the public!

I just did something similar the other day. My dog has never snapped or agressed at another dog, but like Maisy with children, she is uncomfortable around dogs who are 'enthusiastic' greeters. Usually I walk away or tell the other person "no, our dogs can't meet." But the other day someone asked me "is your dog friendly?" As she was being dragged towards me by her boisterous large dog (Sienna is on the small side) the first thing that came out of my mouth was "No, she isn't."

Sometimes, you're right, it's just easier than trying to explain things to a clueless stranger.

Something else that works really well for dogs that are dog reactive and doesn't have the same stigma of biting is yelling to the owners of off leash dogs "MY DOG IS CONTAGIOUS!"

Great post and I have to confess that I've been tempted by this one too.

I have two fearful dogs, the big one is very passive and would rather run away, but the other has an active defence reaction and because he's small and cute people think they can take liberties. I always say no to requests for petting.

I've just heard of Dog Flags too - they're signs you attach to leads to say either 'I'm friendly' or 'Ask before approaching' - anyone used them?

I take the point about creating a reputation for dogs locally; all our neighbours know our dogs are in 're-hab' but it's so true that people can be really narrow-minded, especially after a bout of bad press.

I despair at the number of ignorant parents out there that tell their children to stick their little hands in a dogs face 'to make friends' and then seem affronted if the dog backs off or reacts negatively.

Anyway, great blog - just found it and looking forward to delving into the archive.

I really like "All dogs can bite," as an answer, because dogs can't be neatly divided into "dogs who bite, aka mean, bad dogs" and "dogs who don't, aka nice, good dogs." There are dogs with different personalities, tolerances, coping skills, and training, which determine what would have to happen for them to bite someone.

Also, if you don't like lying, remember there's no rule against answering the question that's implied rather than the one that's asked. "Don't touch her" or "You can't pet him" might sound like non sequitur responses to "Does your dog bite?" but it might be the best answer with a kid.

I can understand wanting to use something to keep unwanted attention away, but I wouldn't want to tell people my dog bites. My rescue Collie is a sensitive soul, though he has improved over the years. I am careful about what situations I place him in, but of course we have to be prepared for the unexpected too, don't we. I tell people he is nervous, if I feel the need to say anything, because it's true and doesn't make him out to be an evil child-munching monster.

I'd be very wary of using an "he/she bites" lie, given our increasing "sue everything" culture. Also, if there were ever an incident involving said dog, where said dog was not to blame, I'd hate to see a lie that was intended to protect the dog, be thrown back at you :-(

I do understand your reasoning. If only everyone understood not to rush up to unknown dogs and to respect the owner's wishes/instructions ...