Worried and Scared: A Maisy Update

In the last week or two, I've noticed that Maisy seems... off. She's just slightly stiff. She needs to take a break halfway up the stairs. She's reluctant to jump in the car, and she's slow and sad-looking on walks. Things that would be easily attributable to aging- Maisy is seven, after all- but these are some of the same things I saw emerge over the summer. You know, before her immune-mediated crash? The one that almost killed her? 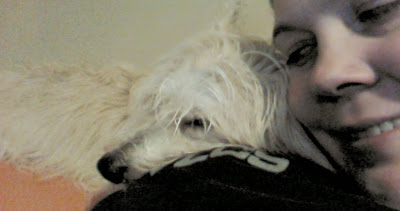 I called Maisy's neurologist, who told me to increase Maisy's prednisone from 5mg every other day to 5mg every day for 7 to 10 days. Then, we have three options: do 2.5mg daily, 7.5mg every other day, or add in cyclosporine (which tends to be quite expensive). He recommended option one, so that's what we'll do.

But then he added that it is not unusual for dogs to have a recurrence of immune-mediated inflammation after one or two months of reducing the dose. Which we did for Maisy about six weeks ago. He also added that dogs who recur at this point tend to have "less longevity" than dogs who successfully transition to no steroids at all.

It's one thing to suspect that your dog likely won't live as long, but it's quite another to be told so point-blank. I may have cried at work. I'm trying to be positive, though. Not only is Maisy very sensitive to my moods, but being sad and scared and worried won't help me enjoy whatever time I have left with Maisy.

Which I hope is a very long time.

I am sorry to hear this news and can understand your worry. Maizie seems to have responded so well to the steroids but long-term that doesn't sound like such an encouraging prognosis. I spent a long while searching for answers for one of my kitties (and subsequently for my fearful Maizie pup) and have been quite encouraged by our work with holistic veterinarians. It has opened up a number of options that just weren't on the radar of our conventional vet. And those options prolonged by heart-cat's (if there is such a term) life by 2 1/2 years over the traditional options. In my experience the holistic vets work hard to get to the root of the imbalance or dis-ease. And the cost of treatment is overall less in our case (and usually fewer side effects). Veterinary Homeopathy has been a recent adventure that has been helping my Maizie with her delayed reaction to a recent Rabies booster. It seems to be peeling back the layers of the onion that is my Maizie. Various (seemingly unrelated) symptoms and behaviors are responding and resolving, including a bit of her fearfulness. That's an unexpected bonus!

Initially I turned to holistic options when our conventional vet exhausted all known options and recommended euthanasia. Now, after using modern diagnostics, holistic treatments are often the first options I consider, knowing that the conventional treatments will still be there if we need them some day down the road.

I know you are well informed and read on dog related topics but I thought I would offer my experience in the event that it could be useful. Best of luck in your efforts to help Maisy heal.

I'm so sorry. Managing auto immune mediated diseases is so hard and exhausting. Cyclosporine was the answer for Magnus. It saved his life. It is VERY expensive, but allowed him to get off Prednisone. We were all miserable when he was on Pred, most of all him. After stabilizing him on Atopica, the brand name which is even more expensive, we have transitioned him to Cyclosporine and he is staying stable now. It was lowering the dose this last time that caused his last crash, but raising it helped. It was at that point I had to accept he will never be off immune suppressant drugs and the drugs that are saving his life will likely shorten his over all lifespan. It plain and simply sucks and I'm sorry you have to deal with this at all!

How you describe Maisey sounds just like Magnus. Though he is stable, he has little stamina. He has stronger days and weaker days. Sometimes we take Maizey's stroller for him on walks so he can last longer. We've learned to adjust activity level to keep him at his strongest. When I do know we're going to have a big active week I make sure he has plenty to keep him comfortable. The worst for me is moderating his activity to accommodate his weakness. He doesn't do as many classes, takes shorter walks, and stays home from the longest vacations, but what he does he loves and this has never broke his spirit.

We have a great rehab-therapist to help with the poly arthritis issues and the exercises and stretches she has him do have really increased his overall strength. On days when he isn't feeling up to a walk we still do exercises and it's all games to him. It seems to help his body be less stiff and achy.

Dogs can live long lives managing auto-immune. It's not the same life as they would live without it, but it's still a full, long life. That's what I hope and aim for. I'm sorry you're dealing with this challenge!

I came to the conclusion that no medical professional has the ability to predict how long one might live. In 2007 when my golden was dxd with cancer I was told he had two years to live. Three years later when an unusual mass was found in his abdomen I was told he had a few days left. He died two years later. A full five years after his initial prognosis. Believe in the power of love, medicine and miracles.

Thanks for the kind comments, everyone.

Katie, thanks for sharing about Magnus. I hadn't connected the dots between what the two dogs are experiencing. So far, the only restriction on Maisy's life has been a prohibition on backpacking trips. We'll see how it goes...

Mary, I know you're right. Just because dogs who are in similar situations typically don't live as long, doesn't mean Maisy will have that fate.

JL- thanks for reminding me we have more than traditional medicine to rely on. Our primary vet clinic is actually a nice combination of traditional and holistic/chinese medicine.